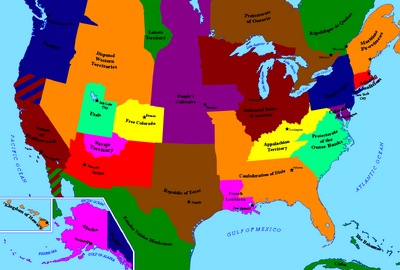 "The year is 1937. The collapse of the old United States has made highways and railroads useless. Airlanes are all that connect the fractured nation-states of North America. Giant zeppelins cross the skies. protected from the rising tide of aerial piracy by squadrons of fearless fighter aces!"
—Publisher's Description[src]

Crimson Skies began as a pitch for a game called Corsairs! for the Virtual World location-based entertainment centers. Eventually this was redeveloped into a board game simulating aerial combat that was introduced by FASA in 1998. In 2000, Zipper Interactive developed the property into a computer game, published by Microsoft. In 2003, it returned as Crimson Skies: High Road to Revenge for the Xbox, as well as a collectible miniature games from WizKids.

Retrieved from "https://crimsonskies.fandom.com/wiki/World_of_Crimson_Skies?oldid=4059"
Community content is available under CC-BY-SA unless otherwise noted.